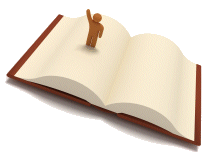 Ronald Davis theorizes that dyslexic individuals are picture thinkers who experience perceptual disorientations in the senses of time, vision, hearing, and/or balance and coordination. Davis Dyslexia Correction provides a solution based on two key elements:

Fortunately, it is very easy to stop the disorientation. All we have to do is teach the student how to recognize when they are disoriented, and then how to use their own mind and awareness to turn off their disorientation – or, in other words, to become “oriented.” This really is no more difficult than teaching a child how to hold their breath while swimming underwater; it is simply a matter of learning to consciously control something that usually happens in our minds without our awareness. 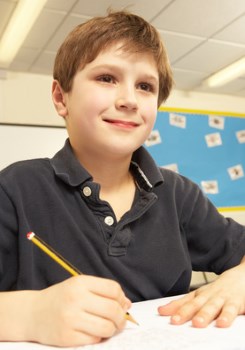 Over the years, Davis providers have developed several methods for teaching this control. The most common and reliable way is called Davis Orientation Counseling®, and is described in detail in The Gift of Dyslexia. Using this technique, the student learns to mentally move their “mind’s eye” to a different vantage point, until they find the optimum point for focusing attention, called the orientation point. Students who have difficulty with the visualization approach can achieve the same effect through a kinesthetic approach, called Alignment and Fine-Tuning. Both are followed by an auditory approach called Auditory Orientation.

Fortunately, the methods are easy to teach. Since it involves a skill that dyslexic children are good at – using their imagination – they usually catch on very quickly.

Sometimes, especially with older children and adults, the results from Orientation Counseling are extremely dramatic, resulting in an immediate jump of several levels in reading ability. This is because for these children, their disorientation has been the major barrier to progress. They may have already had years of education or tutoring; once disorientation is resolved, all their past experience clicks in to place, and progress is typically extremely rapid.

However, learning to control disorientations does not resolve dyslexia. All it does is resolve a key symptom of dyslexia, not the underlying cause. Until you fix the cause, the symptoms will inevitably recur.

Resolve the Factors that Trigger Disorientation:

The reason that controlling disorientation is not enough to resolve dyslexia is that the disorientation is a response to confusion, frustration or stress. In the case of reading, this response is triggered by confusion over letters or words. As long as this confusion exists, and there is no picture for what a word represents, the student will continue to become disoriented when reading.

Disorientation is often caused by individual letters that are visually or auditorially confusing to dyslexics. For example, my son found it difficult to distinguish c from e because of their similar appearance; others have problems with c and s or c and k because they often represent the same sound. 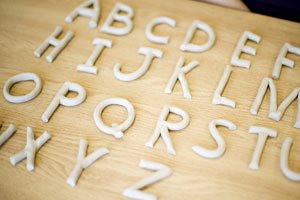 Thus, the first step toward resolving dyslexia is to create the letters of the alphabet in clay. We use clay because it is a three-dimensional medium and also involves a creative, participatory act. By molding the letters in clay, the alphabet is no longer something arbitrary but something the child (or adult) has made, and thus becomes a part of them.

Through observation of how the student forms the letters, and how they react to saying the names of the letters, we can find which are ‘triggers’ for disorientation, confusion and misperception; and help the student overcome the confusion aroused by that letter.

The student models two complete alphabets, first upper case, then lower case. As each set of letters is mastered, the student explores and discovers the correct shape, name and sequence of each letter.

Alphabet Mastery is followed by similar work with punctuation marks and pronunciation or speech sounds. With this knowledge, the student is equipped to use one of the most important tools for learning that we can provide the picture-thinker: the ability to explore the meaning of words with the dictionary.

The words that cause the most confusion for dyslexics are common words, such as it or from. Often a student will easily read a longer word in a story, such as crocodile, but hesitate or stumble over a word like the. Because these words lead to disorientation, we call them trigger words.

This is because the dyslexic student thinks with pictures. It is easy to envision a crocodile in one’s mind, but very difficult to imagine an ‘of’ or a ‘this’. 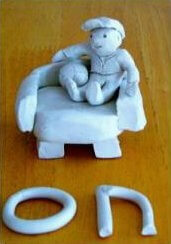 We resolve this problem through a process called Davis Symbol Mastery. After looking up a word in a dictionary and discussing a definition with a helper, the student models an object or set of objects which accurately represents the meaning of the word, as well as the letters of the word in clay. This process goes far beyond the multi-sensory and phonemic awareness strategies that are recommended for dyslexic learners. It engages the creative process and establishes a lasting mental image for a specific word and series of letters. It produces comprehension and long term retention of the spelling and meaning of a word without the need for phonetic decoding or memorization. It stops the word from causing any future disorientations.

There are more than 200 trigger words in the English language that have to be mastered, but once this is done the student has developed a working arsenal of sight words – words that are both recognized and understood as soon as they are seen. All you have to do is count the number of small, abstract words in this sentence to see what a difference that will make.

The other goal is that the student has learned a method that can be applied to any word or concept. Davis Symbol Mastery can also be used to master the vocabulary of any subject. The word ‘polygon’ or ‘cytoplasm’ can be mastered even more easily than the word ‘by’. As the student grows older, he has a method that will enable him to master any concept that causes problems in school.

To help dyslexic students master the mechanics of reading, and increase reading speed and comprehension, we use a set of three techniques: Spell-Reading, Sweep-Sweep-Spell, and Picture-at-Punctuation. One problem that dyslexics have is that it is not natural for them to sound out words letter by letter, or even track the letters of a word from left-to-right, taking in one letter at a time. As picture thinkers, they want to look at all the words at once. Their struggle to sound out written words leaves them unable to comprehend written material and usually necessitate re-reading the same text numerous times often at the cost of severe headaches. These exercises allow dyslexics a way to quickly, comfortably and easily learn to visually track, decode, and comprehend written material using their natural abilities.

A detailed explanation of the Davis Theory of dyslexic thinking and development as well as a step-by-step instructions for the Basic Davis Methods can be found in the book The Gift of Dyslexia.

Leave a Reply to Cheri B Cancel reply

This program is the weirdest thing – this is working! I have undergone changes that mean I can now understand information in the paper world. It’s possible to be less angry, the feeling is like a freedom! Here we are at the end of the week, and something has worked. It feels like hope is planted in the soil. I will be responsible for furthering my paper understanding – that is no small feat!