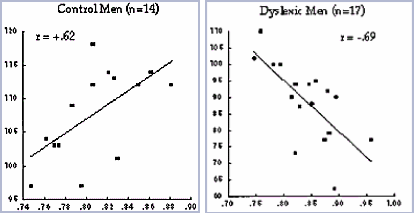 Dyslexic men show opposite patterns from controls, with reduced reading ability as left brain use increases.

During the non-word rhyming test [“Do leat and jete rhyme?], both dyslexic groups showed less activation of the left posterior and temporal areas of the brain as compared to the control group. However, the dyslexics who were improved readers also had greater activation of right temporal areas and both right and left frontal areas.

Ordinary readers use the left temporal area for sounding out words.

Poor readers do not use the left temporal area to find the sounds of words.

For the semantic category test [“Are corn and rice in the same category?”] the persistently poor readers showed brain activity very similar to the nondyslexic control group, despite the fact that their reading performance was significantly impaired. Like the control group, the persistently poor readers activate left posterior and temporal systems. In contrast, the improved dyslexic readers bypassed this area entirely.

Ordinary readers also use the left temporal area when reading for meaning.

Dyslexics who are capable readers  do not activate the left temporal region. 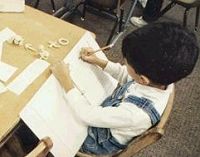 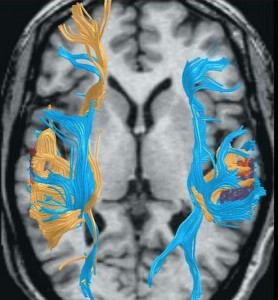 by Matthew HeadMy website, Dyslexia Life Hacks, shares various tools, tips and tricks that I have… [...]