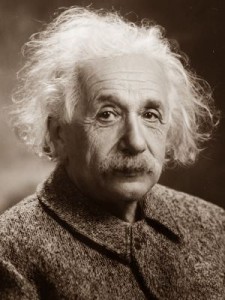 
Imagination is more important than knowledge. Knowledge is limited. Imagination encircles the world.

Albert Einstein was a German-born theoretical physicist. He developed the general theory of relativity, one of the two pillars of modern physics (alongside quantum mechanics). Einstein’s work is also known for its influence on the philosophy of science. Einstein is best known in popular culture for his mass–energy equivalence formula E = mc2 (which has been dubbed “the world’s most famous equation”). He received the 1921 Nobel Prize in Physics for his “services to theoretical physics”, in particular his discovery of the law of the photoelectric effect, a pivotal step in the evolution of quantum theory.

Einstein excelled in visual imagination and spacial reasoning.  He attributed his conception of his special theory or relativity to a thought experiment in which he envisioned himself riding on a streetcar traveling at the speed of light.

Einstein also frequently described his thought process as being nonverbal:

Words or language, as they are written or spoken, do not seem to play
any role in my mechanism of thought.

(From a letter to mathematician Jacques Hadamard, 1945)

Thoughts did not come in any verbal formulation. I very rarely think in
words at all. A thought comes, and I may try to express it in words
afterwards.  (Said to his friend, psychologist Max Wertheimer).

Writing is difficult, and I communicate this way very badly. (Reported by physicist Robert S. Shankland in Conversations with Einstein)