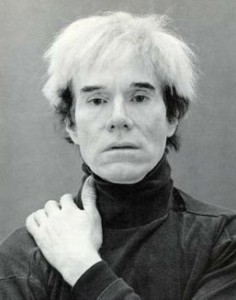 Andy Warhol was an American artist who was a leading figure in the visual art movement known as pop art. His works explore the relationship between artistic expression, celebrity culture, and advertisement that flourished by the 1960s. Warhol’s art used many types of media, including hand drawing, painting, printmaking, photography, silk screening, sculpture, film, and music. He was also a pioneer in computer-generated art.

Warhol was also a prolific filmmaker and the author of multiple books featuring his artwork.

Almost every sentence in his hand is full of bizarre spelling errors. Clearly, he was dyslexic, though undiagnosed (I assume dyslexia diagnoses were rare at the time). Some of his errors: “vedio” for “video,” “polorrod” and “poliaroid” for “Polaroid,” “tailand” for “Thailand,” “scrpit” for “script,” “pastic” for “plastic,” “herion” for “heroin,” and “Leory” for “Leroy.” Biographers have suggested that sympathetic female classmates in college helped him compose his papers. But these friendly collaborative efforts weren’t enough to see him through the required course in “Thought and Expression” at Carnegie Tech, and he failed his first year.  (From Andy Warhol, 2001)

by Sue Hall.  Did you know currently there was no universal symbol for dyslexia? Well, there… [...]

by Carl Nigi.  Charlie came to me for a Davis Dyslexia program. Here is what he… [...]

by Shweta Soni.  For students, subject vocabulary is hard and there is a lot to consume… [...]

by Vanessa Victor.  To-do lists have never worked for me. I always start with good intentions,… [...]

We checked with a family we had known who struggled with their son’s dyslexia years back to see if they had ever found anything that worked before deciding if our son should complete the Davis program. Their son had completed three different programs/tutorings, and they felt that the Davis program helped him the most. They indicated that had they attended it first, they likely would not have done any other. We met with the facilitator. Within two days, our teenage son told us he wanted to do the program.

This website uses cookies to improve your experience while you navigate through the website. Out of these, the cookies that are categorized as necessary are stored on your browser as they are essential for the working of basic functionalities of the website. We also use third-party cookies that help us analyze and understand how you use this website. These cookies will be stored in your browser only with your consent. You also have the option to opt-out of these cookies. But opting out of some of these cookies may affect your browsing experience.
Necessary Always Enabled
Necessary cookies are absolutely essential for the website to function properly. These cookies ensure basic functionalities and security features of the website, anonymously.
Functional
Functional cookies help to perform certain functionalities like sharing the content of the website on social media platforms, collect feedbacks, and other third-party features.
Performance
Performance cookies are used to understand and analyze the key performance indexes of the website which helps in delivering a better user experience for the visitors.
Analytics
Analytical cookies are used to understand how visitors interact with the website. These cookies help provide information on metrics the number of visitors, bounce rate, traffic source, etc.
Advertisement
Advertisement cookies are used to provide visitors with relevant ads and marketing campaigns. These cookies track visitors across websites and collect information to provide customized ads.
Others
Other uncategorized cookies are those that are being analyzed and have not been classified into a category as yet.
SAVE & ACCEPT
Translate »