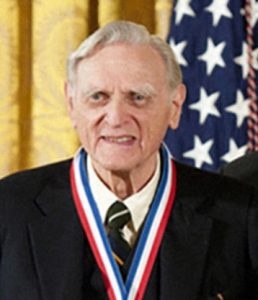 John Goodenough, known for his work in improving the design of the lithium ion battery, was awarded the National Medal of Science in 2013, and the Nobel Prize in Chemistry in 2019.

As a child, Goodenough struggled with undiagnosed dyslexia (back then, he says, “you were just a ‘backward student’”).

“It was hard for me to read and write but I eventually learned myself.”

“I was dyslexic as a child and I couldn’t read very well. I wasn’t going to major in history or English. So I did mathematics.”