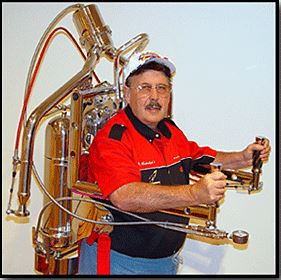 
I’ve built more rocket-powered vehicles than any other man on this earth.

Ky Michaelson became interested in rocketry when he was given a chemistry set as a child.

As a child, Michealson struggled in school. He dropped out in the ninth grade after years of instantly forgetting whatever he learned and being called “stupid” by classmates. He didn’t learn to read and write until he was in his 60’s. It was only later in life that he realized that dyslexia was the cause of his childhood difficulties.

Despite his struggles with literacy, Michaelson has a “mechanical photographic mind.” He can envision and build complex projects in his head. He is the founder and leader of the Civilian Space eXploration Team, which a the first group to officially launch an amateur rocket into space.