Four sets of word-form tasks were administered during fMRI scanning to 18 child dyslexics and 21 controls to identify unique brain activation associated with four kinds of mapping—orthographic, morpheme with and without phonological shift, and phoneme—before treatment, and to measure the effect on each kind of mapping after orthographic and morphological spelling treatment (to which dyslexics were randomly assigned). Dyslexics and/or controls showed significant pretreatment activation in group maps in 18 brain regions during one or more of the mapping tasks. Average fMRI z-scores were used to determine for each kind of fMRI mapping which of the 18 brain areas (a) differentiated dyslexics and controls before treatment; (b) showed significant pre- to post-treatment activation change in dyslexics; (c) showed post-treatment ‘normalization’ of activation; and (d) changed differently for dyslexics as a function of the kind of treatment received. Dyslexics in orthographic treatment showed reliable change, normalization, and treatment-specific response in right inferior frontal gyrus and right posterior parietal gyrus. Implications of the findings of the combined group map and individual (region of interest) analyses for neurolinguistics, including assessment, treatment and brain plasticity, and the role of different word forms in spelling at a specific developmental stage, are discussed.

Orthographic spelling treatment
Words were selected from high frequency words in Fry graded lists. A different list of words was used in each lesson, but each word in the list was practiced using each of two orthographic strategies.

The goal of the first orthographic strategy (Photographic Leprechaun) was to create a
precise representation of all the letters in a written word in memory including those that
could be phonemically recoded and those that could not. The teacher-directed children to
look at and name each word on the list, one word at a time. Children were encouraged to
look carefully at and name each letter in the word from left to right and then to close their eyes and look at the snapshot that their photographic leprechaun had taken of the word in their mind’s eye. Next the teacher asked them to direct their attention to one or more letter positions in the word and raise their hand when they could name the letter(s) in those positions (e.g. first, last, third and fourth). Letter positions were chosen that corresponded to silent letters, schwas (reduced vowels), or spelling units that had alternative plausible spellings for the same phoneme.

The goal of the second orthographic strategy (Proofreader’s Trick) was to strengthen
further the precise representation of the written words in working memory. The teacher
explained that proofreaders find typos by spelling words backwards. Children were
directed to (a) take a good look at a target word on the list and name all the letters in it, (b) close their eyes again, picture the word in their mind’s eye, look at all the letters in the word, and then while they held the word in memory spell it backwards, quietly naming each letter in reverse order, starting with the last letter and ending with the first letter. They were instructed to open their eyes when they named the first letter in the word. Then they checked their reverse spelling against the target word before the group moved to the next word.

As hypothesized, the effectiveness of the orthographic treatment for increasing brain activation during the Orthographic Mapping task, to which it is theoretically linked, was demonstrated. In contrast, morphological treatment was not effective in leading to significant change on the Morpheme Mapping task. Anterior cingulate, a region associated with conflict management (Mesulam, 1990), did not change in activation on Morpheme Mapping with Phonological Shifts, suggesting that the dyslexics did not change in response to treatment for a task that required coordination of word forms and possible conflict.

Plots of average z-score (Fig. 4 for the right inferior frontal gyrus and Fig. 5 for the right posterior parietal gyrus) versus time show that the z-scores for dyslexics in the orthographic treatment group approached the same value as controls after treatment whereas this effect was not observed for morphological treatment group.

The dyslexics and controls did not differ in BOLD activation in right inferior frontal gyrus (see Fig. 4) or posterior parietal regions (see Fig. 5) on the Orthographic Mapping task following orthographic treatment, indicating that the ability to map the orthographic word form onto letter strings may have normalized in these regions after theoretically linked treatment. 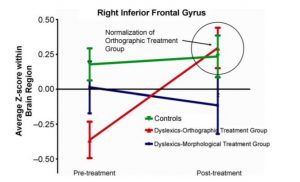 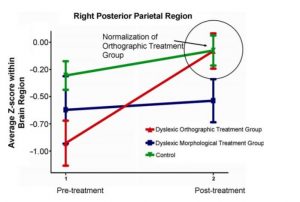 Results of the group and individual analyses converged (see Figs. 2 and 3 and Table 4) in identifying two brain regions during orthographic mapping—right inferior frontal gyrus and right posterior parietal regions—in which dyslexics (a) differed from good spellers prior to spelling treatment, (b) changed reliably after treatment, (c) normalized, and (d) showed evidence of treatment-specific responding during orthographic mapping following orthographic treatment. One of these regions—right inferior frontal gyrus contains the right pars triangularis where dyslexics of the same age in a structural imaging study differed from controls; and a behavioral measure of orthographic coding was correlated with the size of the surface area of this structure (Eckert et al., 2003)

My 13-year-old daughter attended the Davis Dyslexia Correction Program six months ago and already we are seeing a great improvement.   She worked one on one with the facilitator in a calm & welcoming environment for six full days.  Since then she no longer avoids reading and writing and her enjoyment and confidence have increased significantly – this after years of suffering at school.  Her level of comprehension and use of vocabulary have also improved enormously, as has her spelling, in a very short period of time.

Ghislaine (Mom of a 13-year-old girl), Washington, US - Learning Tools