When I was an infant, my mother was told I was a Kanner’s baby. Dr. Leo Kanner coined the word autism in the US. For the first nine years of my life, I was oblivious to everything. I wasn’t even aware that I was alive. 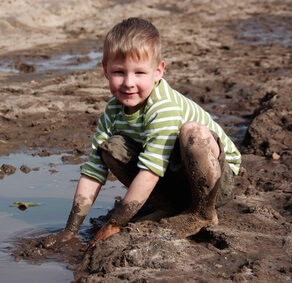 During part of my first eleven years, I had to go to school. I spent most of my time in the back of the classroom sitting in a corner, facing the wall.

At the age of twelve I still hadn’t learned a thing in school — not even the alphabet. My mother worked on me every day trying to teach me the Alphabet Song. She even tried to teach it to me in German. I couldn’t learn the song past the first few letters.

My brothers were normal, so they were allowed to have things and do things that were forbidden to me. They had pocket knives and wrist watches.

One night I got hold of my older brother’s pocket knife and nearly cut off one of my fingers. But I still wanted a pocket knife.

Somewhere in the void of autism, I discovered that by mixing dirt in the back yard and water together in a puddle, I could make a thick goo. This substance could be formed into anything I wanted. The dirt in our back yard was a gummy red clay. If you let it dry completely, it would hold its shape for a long time.

I have no idea how many pocket knives I made from red dirt and water. In my pocket, within about a week, each one would crumble back into pieces of plain red dirt. But I had a pocket knife.

My brothers’ wrist watches were made from metal and leather. Mine was made from red dirt and string. But at least I had one. The year I turned twelve, I was labeled uneducatably mentally retarded. For me it meant I didn’t have to sit in the corner anymore. I got to turn around and see what everyone else saw.

Along one wall, just below the ceiling, a banner displayed the letters of the alphabet. I don’t know why I began copying the letters in red dirt and water. It took awhile, but eventually I got each one of them made. Then I managed to put them all in correct order, with each in its correct attitude. Then I asked my brothers what they were.

When I was age twelve, my mother was told I had the intelligence of a chimpanzee. When I was seventeen, my intelligence was tested. I scored 137 points on the IQ test.

When I was 18, I was told that I would never learn how to read, write and spell like a normal human being. They said that when I was being born, the doctor had used instruments that pinched my head and ruined my brain.

When I learned to speak, words became part of my universe, so when I made a model of an idea, I also began to make the name of the idea. Between the ages of 17 and 27, I created more than a thousand ideas and words in modeling clay. By the time I was 27, my IQ score had risen to 169.

When I began to develop procedures for working with dyslexics, working with clay seemed natural. Most dyslexics really enjoyed it and learned by using it, just like I had.

I believe the potential for genius in some form exists in all of us, if only we have a foundation on which to build our thinking, and a goal we desire to achieve.

The Davis Symbol Mastery program is ideal for parents who are homeschooling, or for after school activities and enrichment.  The use of Symbol Mastery is not restricted to children who have learning difficulties, but is a helpful tool for all learners. ...