Home > Davis Methods Explored > About Davis Methods > Inside the Davis Program > I can see clearly now: Beating dyslexia with clay

I can see clearly now: Beating dyslexia with clay

Author
By Brigid McConville © 1998, Reprinted  from The Independent: Education (UK) with Permission. 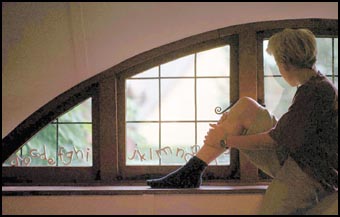 As all  too many parents know, the quest for “solutions” to dyslexia can be a long and frustrating one. But now a new teaching method – in which dyslexics model key words in clay – promises to put an end to the problems of dyslexia once and for all. The Davis Dyslexia Correction Programme, which was devised in America in 1982 by Ron Davis (himself a dyslexic), has come to Britain where it is rapidly winning converts.

The programme, essentially a week’s one-to-one tuition with follow-up work to do at home, claims an extraordinary 97 per cent success rate. Its basic premise is that people with dyslexia have a special gift: they think mainly in three-dimensional pictures rather than words. This means they can be immensely talented but that they cannot think with abstract words. Every time they read words such as “a” or “the” (which they can’t picture), they experience a mental blankness. As these blanks accumulate, confusion sets in, causing “disorientation” (distorted perception) as they try to make sense of the two-dimensional words in front of them.

How the programme works
Davis’s training starts by showing dyslexics how to control their ever-roving “mind’s eye” or imagination. Once they can stay focused – “on point” – they begin to work through the alphabet, removing confusion by making each letter three-dimensionally in clay.

Once they have got the hang of this, and have “mastered” punctuation marks (called “road signs” in reading), they set to work in the same way on “mastering” all the abstract words in our language. 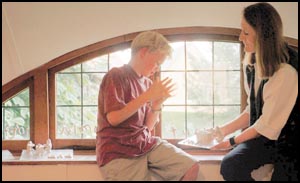 There are 217 of these “trigger words” (because they trigger confusion) and Davis’s clients simultaneously model not only the letters of each word in clay, but their own chosen image of its dictionary definition. The word “which” might be modelled as a little figure standing at a crossroads; “together” might be a couple holding hands. Then the client speaks the word aloud, “telling” its meaning. In this way (the theory goes), the three parts of a word – meaning, sound and written form – become united, those disorienting blanks are replaced by images and the dyslexic finally gets the full picture of what is on the written page.

Creating new pathways in the brain
“What we are about is creating new neural pathways,” explains Hilary Farmer, who became the first licensed UK Davis facilitator in 1997. Farmer, with an MA in Education, has 12 years’ experience of teaching in FE and has specialised in working with dyslexic students. She also has a dyslexic daughter of 19 who has recently completed the Davis programme, which is available to anyone from eight to 80.

“Davis is like complementary therapy,” she says, “in that we tackle the causes of dyslexia.” And the programme has an impact not just on the mind, but on the emotions too. “Dyslexia can involve horrendous frustration and lack of self-esteem,” says Farmer, “and while the Davis programme can be a literacy ‘jump start’, it can involve changes in confidence and self-esteem as much as in spelling and writing.”

“These are all different symptoms of disorientation,” says Farmer, “depending on which perceptions are distorted.”

At around £1,000, the programme is not cheap, but it is nonetheless in great demand and Farmer currently has a six-month waiting list. (By the New Year she will have two qualified colleagues to help her out, with 30 more Davis trainees in the pipeline.) She stresses that it is no use parents dragging unwilling children along for a “cure”; each client has to be willing and highly motivated.

And most, she says, “respond with overwhelming relief that at last someone has understood them”.

Diary of a Week with a Facilitator

Diary of 13-year-old Bridget Dalton's week with her Davis facilitator Monday I was really excited because I was having a week off school and coming to a place I didn't know and staying in a bed-and-breakfast. But I was also quite nervous, mainly...

by Carl Nigi.  In this video, I answer a question about the expense of doing a… [...]

Dyslexia Explained: A video overview of the dyslexic thinking style, and strategies for success