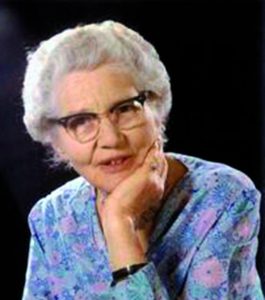 Helen Brooke Taussig is known as the founder of pediatric cardiology for her pioneering work developing a surgical shunt to treat “blue baby” syndrome. She also helped prevent a thalidomide birth defect crisis in the United States, testifying to the Food and Drug Administration about the devastating effects the drug had caused in Europe. She was the first woman elected to lead the American Heart Association, and was awarded a Presidential Medal of Freedom in 1964.

As a child she experienced severe dyslexia, and struggled in school. She received extensive tutoring from her father, a Harvard University economics professor, and went on to excel in college and beyond.

“She was dyslectic. Her father was extremely patient with her reading problem and never complained, even when he was discouraged and disillusioned about her ability to complete grammar school. They struggled until her reading began to improve.”   [A gentle heart : the life of Helen Taussig. Gerri Lynn Goodman, 1983, Yale University.]