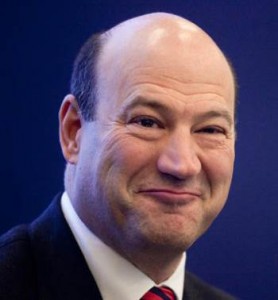 
Probably the most poignant thing I heard out of a teacher that I wasn’t supposed to hear, was when she told my parents if they were really lucky and spent a lot of time with me, I might grow up to be a truck driver.

Gary Cohn is the President and Chief Operating Officer of the investment firm, Goldman Sachs.  Cohn was formally diagnosed with dyslexia as a child. He was a poor student and had attended four different schools by the  the time he reached the sixth grade.  He was called an “idiot” by teachers and classmates.

The one trait in a lot of dyslexic people I know is that by the time we got out of college, our ability to deal with failure was very highly developed. And so we look at most situations and see much more of the upside than the downside. It doesn’t faze us. I’ve thought about it many times, I really have, because it defined who I am. I wouldn’t be where I am today without my dyslexia. I never would have taken that first chance.

by Abigail Marshall.  Book Review: Breaking the Code by G.B. Mackenzie. This is a novel about… [...]

by Christina Tan.  I recently facilitated a 5-day Davis Dyslexia Correction Programme with an adult dyslexic.… [...]

by Hayley Butcher.  The imposter syndrome is psychological phenomenon referring to internal thoughts of incompetence, feelings… [...]

by Arije-Aike de Haas.  Studies have shown that some consider accommodations unfair, especially when the individual… [...]